They’re not meant to be used with tubes

Thus chided the very patient Elisabeth Foot from Schwalbe when I had complained that my “bullet proof” G-One All rounds were in fact thorn magnets.  She also recommended Big Ben Plus or Marathon Plus MTB, but both came in only 2 inch versions and I wanted at least the 2.25″ our  bikes came with, as well as the lowest rolling resistance I could get.

When I got home from our 3 months around very mixed surfaces all over Europe I decided to give tubeless a go. 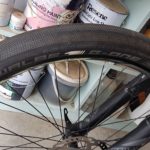 We had been using Schwalbe Rocket Rons and Racing Ralphs, and had about 8-10 flats and had replaced one tyre so it was time to try something new. I’m still not sure that the G-Ones 60-584 (27.5×2.35) are going to be the all-rounders I need, but I have them, they are Tubeless ready, or Tubeless Easy as Schwalbe brands them, so they will do for starters.

However, Orange sealant proved to be the first stumbling block, along with Gorilla Tape, both highly recommended by various Facebook groups, and both unobtainable in NZ!  What’s the point in luxuriating in Sunday shopping hours if you can’t buy anything except by shopping online, usually from those closed-on-Sunday European emporiums. By the time they had arrived I had seen enough youtube videos to be an expert, although I was fully prepared to visit my LBS to have them do it properly after I had failed, so I launched into installing them.

The best advice gleaned from all those videos was

The first attempt went well.  New G-Ones are devilishly hard to get onto the rims, they seem to be tighter than any other tyre I’ve fitted, but once on, and without sealant to begin with, they eased up onto the rims with a nice tight fit after the recommended quick light spray of silicon. I have a good pump (Topeak Joe Blow) and even though I’m no longer young and fit I could seat these big balloons  without raising a sweat.  I left them overnight, noticed that one was deflating slowly and worked out that it was my chopped down valve insert leaking, gave it a 50km test run to make sure, then replaced it with a proper one.  That’s a messy job with the sealant splashing everywhere but luckily it cleans up well with a damp rag, and the properly made insert works a treat.

After slipping around a bit on the mud and grass one day last week I decided to change back to the knobblies.  The Rocket Ron I had on the front had been hammered by thorns during our tour around Europe last year and it had one hole bigger than a matchstick, one ordinary hole and several small leaks around the sidewalls.  Orange Sealant worked exactly as it should, it fizzed and bubbled and needed an pump up a couple of times but then it settled down with every leak well and truly plugged, and I added an extra squirt the next day and they haven’t even gone down at all in a week.  I’ve got a Racing Ralph on the rear now, and even though the knob in the middle are mostly gone, they make a helluva whine on the road after the luxury quiet hiss from the G-Ones. Noticeably a bit slower too, but not enough to worry me.

The old stuff was dead easy to remove from the tyres too, because Orange forms a skin right around the tyre, and it all just peeled off in sheets.  I haven’t used other sealants, but I’ve seen photos of how they ball up and form big lumps, but there was nothing like that.  I probably could have left it on, except for the rims which I would have had to clean carefully before re-installing, and I’ll do that in future. I left it on the wheel rims though, figuring it would help keep things airtight.