This will be my last post on this trip, I suspect. It’s too hard on a phone to get everything right, copying and pasting and correcting and editing take forever, and really, I’d rather just keep on riding. No worries, I’ll be home in a couple of weeks and I’ll update the Croatia page then.

We escaped Trieste and it’s  Bacalore festival crowd as quickly as possible, and had a scenically hilly ride over to the Slovenian border of only a few k’s away

and into what is often described as a stunning coastline. If you like resort towns. Luckily we had chosen Piran – the most untouched tourist town I’ve seen. Narrow cobblestone streets, some almost too narrow for our handlebars, and the locals still live there, unlike all the other historic centers which empty out at night leaving tourists looking for local flavour. We stayed in a hostel in a typical Piran house with steep stairs and a rooftop terrace, walked around in the evening and biked Up into the hills during the day. These guys know how to do “up”!

Big hills. 550m from sea level, then down to 350 back to 700 before a final 20k on narrow main road with NZ style drivers. Not very pleasant. I was buggered when we got to Postonja because I had to seriously ration the battery use, 98% used today. We’ll come back this way because of the castle and the Skocjan caves which I hear are much better, less Disneyed than the Postonja ones.

Up and then down to Ljubjana. We thought we were outsmarting Mapy when it took a route us over a mountain and we spotted the road that skirted around it, but the 900m part of the ride was the town on the other side anyway. Still, lovely to ride through villages only 100m apart sometimes, and the drop down to the plains was worth all the effort.

V cheap Airbnb in Ljubjana, and the owner drove us into the center of town where there were 100s of bars and restaurants full of locals enjoying the unseasonably balmy evening. We walked for ages looking for some local flavour with less than €20 mains, and finally found it at the end of the Street, Druga Violina – Google it and come here just to go there. Roast chestnuts on the street for an entree, and Jill had the darkest chocolate ice cream ever as we walked home.

We took the train to Bled, the truly lovely lake featuring in every tourist publication, because we didn’t want a 2 hour ride across the smoggy plains followed by a heavy climb through more of what we had already seen. Found an excellent apartment 3km outside town and scored the late afternoon sun for an introductory ride around the lake taking dozens of cliche shots.

30k out of Bled is another stunner of a lake, but half the ride is on a two lane, no shoulder road which scared the hell out of us. Real bike tourers might think it’s ok, but we’re only juniors. B. Lake is well worth the ride, one of the prettiest things ever, but even better was the half of the ride off the road through untouched villages where locals we’re just living their daily lives, living in what looked to be hundreds of years old houses sometimes, although many had neat stacks of timber seasoning beside the also near piles of firewood, indicating their love of rustic charm might be wearing thin.

The Julian Alps part. Actually yesterday’s lake is part of them but today’s ride up one valley and down the next is truly Alpine although without the heavy climbing. We went to the far end of the road on the southern part of the loop, deer on the road, sun rising over mount trigav to light the 1000m cliffs full of autumn colours on the north, and returned along the northern valley which we shared with mototrways, rail and ndless industry, although mostly on a separate trail. We found our way to the far end of the famous vintgar gorge so that we would only have to walk one way, and ignored the no bikes signs which was a big mistake and a week later my back is still complaining. Lots of steps, lots of passages of narrow suspended bridges and lots of tourists who were very nice to us but we were still a bloody nuisance, and I didn’t enjoy it as much as it deserved.

Train back to Postojna because it was getting seriously cold. Checked out the Predjama castle (ok, but if you’ve seen a photo it’s enough and we didn’t go inside) and sprinted to the Skocjam caves which were definitely worth the effort. It’s a Very Big Hole.

The next day we visited the other major Slovenian attraction, Lipica where the original Lippanzer horses gave been bred for about 400 years, and as a non-horsey person I loved it, then a final downhill to Kopec for a last night in this country. 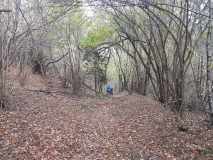 It feels like a place that’s on the brink of being killed by tourism. It’s well on the way already in the major spots but it doesn’t take much effort to find the real country, the people we met were all lovely, the drivers, while nowhere near as considerate as their northern neighbors were at least mostly quite considerate and I reckon if you’re reading this and have a bike that you should give it a go sooner rather than later. I’d love to have a look at the Eastern parts sometime soon.