After a few days in Munich with Rex and Moni, and a couple more visiting Eva and her family at Clarsbach, 20k out of Nuremberg we were feeling thoroughly unexercised, and stuffed with too many dumplings, so had another day on a train to visit the highly recommended Bodonsee.

Lindau Island turned to be quite charming in spite of the Disneyfication, 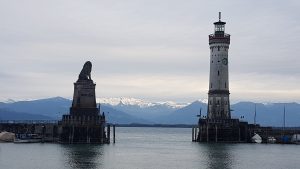 and even that was more making the most of the waterfront with its 1000yr old lighthouse,than destroying the place with shopping mall retail icons, although Esprit, UCB and Timberlands are always there where tourists gather. Even at this time if of year there were about a million tourists, but then we found out that the next day was German unification day, so naturally they were all going to flock to their favourite playground.

We went anticlockwise, which is a fairly meaningless thing in this digital age, it was overcast so we couldn’t see the surrounding mountains, the bike trail followed the road through the continuous housing, and when we escaped to the quieter tracks on the shore line they were for pedestrians only, millions of them. In the old towns it was worse, but we made it to Uberlingen with smiles on our faces because it was lovely  anyway, and we saw zeppelins flying. 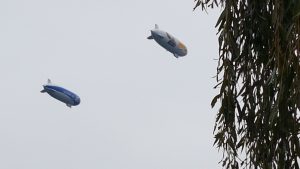 The cafe below K hotel sold Flat Whites and roasted their own beans, and made coffee nearly as good as anyone in Wellington so we had a great start to the next day around to Konstanz.

Much more scenic and unpopulated, with a pleasant lunch break at Radolfzell where I had a new tyre fitted while we ate  lunch by the lake and chatted with a man who balances stones who knew the Korean chap in San Fransisco who we saw doing the same. Konstanz lacks charm and we managed to find the worst hostel in Europe. 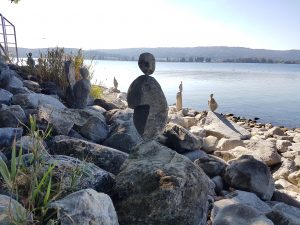 The next day was through the Swiss section so we stocked up on cheap German supplies, tidied ourselves up to fit in and meandered along happily in full sun and great views once the fog lifted. Crossed through Austria over the Rhine Delta and back to Lindau.

Our gasthaus host told us that the gondola at bergenz takes bikes, so the last day at the lake was sorted with a ride up the 1000m Pfander peak and a 16k downhill through stunningly lovely stuff. It took far longer than it could have done because we wanted it to last forever.

Maps might come later, but it’s only around the lake.

I’ll have to reload some of these photos when I get home because the dodgy interweb connections couldn’t cope. 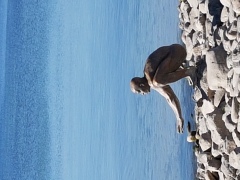 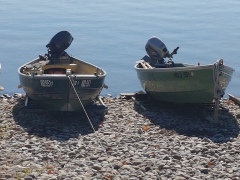 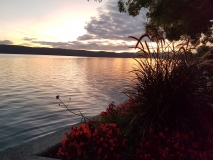 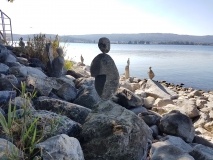 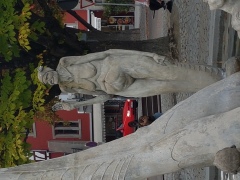 One thought on “Bodonsee/Lake Konstanz”